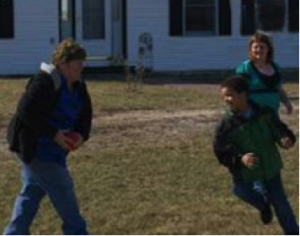 When Vicki Radebaugh first came to CPO, she was in the same wheelchair she had occupied for six months. “My doctors told me I’d probably be there forever,” said Vicki. She suffered from a hereditary foot condition that caused the bones in her feet to slowly deteriorate. “I had unknowingly broken my foot but continued to walk on it,” she says. “When I finally had surgery, it was too late – it had healed improperly and I had overcompensated with my other foot for far too long.” As a result, not only was she in a wheelchair, but on a multitude of medications for pain, high blood pressure and depression.

After being referred to CPO, she was fitted with an Ankle Foot Orthosis (AFO). “I tried it on and it felt wonderful,” she says. “I immediately felt the difference when I had that brace on.”

Since that day, life has changed dramatically for Vicki – for the better. “I can get the mail, I can mow the lawn, I can four-wheel and go-cart with the kids. Sometimes I’ll start dancing, and my kids look at me like I’m crazy – they forgot how goofy I am!” Incredibly, her overall health has improved as well. “I am no longer on my blood pressure medication or antidepressants,” she says proudly. “I truly believe they saved my life.”