Having been born with bad knees, at 13 years old, doctors performed reconstructive surgery on both of my knees. We were told then that someday both of my knees would have to be replaced.

In June of 2008, I had my first revision of the right knee at the University of Iowa, but, unfortunately, my knee scarred up from all the trauma, and I was no longer able to bend my knee as a result. I started walking with a bad limp, which put a ton of strain on my hips and back.

In October of 2017, revision number two was performed at the Mayo Clinic, and within six months, I was completely scarred up once again. I was told nothing else could be done for my knee.

In January of 2019, for my own peace of mind, I needed to hear one last time that nothing can be done to fix my knee. Instead, I was told an above-the-knee amputation of the right leg was my best course of action.

In February of 2019, I met with the surgeon that would be performing the amputation and was told the ball was in my court and to let them know when I was ready to move forward.

The next 6 months of my life were spent contemplating how it all led to this.

On August 15, 2019, I told the doctor, “I’m ready. I can’t take the pain any longer.” It had been a long 12 years of pain since the original surgery. I was informed the surgery schedule was about 8 weeks out.

On August 20, 2019, the doctor called and said, “We have an opening for surgery. Does August 30, 2019, work?” Wait, what! That was only ten days away! The decision had already been made, so I trusted the timing and decided it was best to not sit and contemplate it for the next 8 weeks.

On August 30, 2019, I had an above-the-knee amputation of the right leg. I have certainly encountered bumps along the road to recovery, but I haven’t looked back since that day. I am now pain-free and back to being me and doing the things I used to love to do.

Take the first step in your journey toward returning to your new normal. We are here to help you every step of the way. Schedule a consultation with a certified prosthetist or orthotist in the nearest CPO clinic. 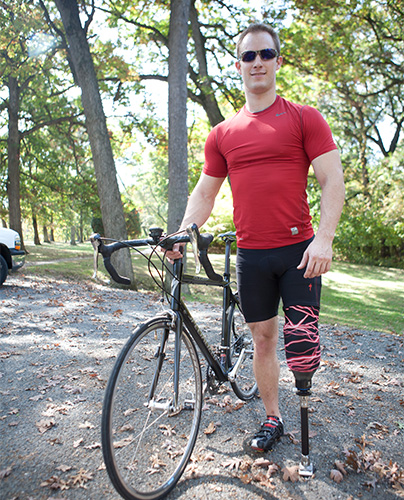